In this post I’m going to talk about the places we went in the city. First of all, we traveled around on a trolley. It gave you narration while you had the opportunity to get off at historical landmarks, or tourist stops. We decided to get off at the section called Colonial Quarters. We toured the section with our guide named Leila. She was hilarious. She talked to us all about what a colonial village would have looked like and even showed us the guns and melted some iron! We were showed the town plaza, the armory, the blacksmith, and the taberna. We had a fantastic time and Colonial Quarters is a must-see.

We also toured around the Pirate Museum. We saw tons of pirate treasure and read lots of pirate tales and legends. Still, literally all I could think about was Pirates of the Carribean. NOT JOKING. The theme song was playing in my head, and everything. It really only worsened when we entered the room dedicated to all pirate related movies, and displayed the actual sword that Johnny Depp used in the Curse of the Black Pearl.

Later, we went on a very uncomforting tour of the jail. The tour guide was dressed in stripes and he was a very convincing actor. He made me really uncomfortable. Thank the fricking gods that the jail closed in 1953. That place is some scary stuff. He talked about the forms of punishments and it was making more than one person including me really uncomfortable. I was so happy when we left it was unreal.

The next day, we went to the general store. They sold everything. From washing machines, to shoes, to food, to bicycles. They literally have anything you can think of. Including, your very own, brand new, milkshake maker! They don’t have these anymore because it is really noisy and it’s so much easier to do by hand.

We also went to the Fountain of Youth. We took some of the water, and Tori immediately made a face and said, “IT DOESN’T SMELL GOOD!” I took a sip and found that it didn’t taste good either. Also, I do not feel any younger. Tori thought she might disappear.

That is all I have for St. Augustine! I hope you enjoyed it!

Day one in the first settlement of the United States went great. St. Augustine was first established in 1513 when Ponce de Leon landed and declared the land La Florida. However, he didn’t just claim the modern peninsula, but everything from Labrador, to California, to the Florida Keys. They planted the Spanish Flag, and then left. NO ONE was left behind. While this may sound great, but this was not really a good move for the Spanish. Soon after they left, the French came and claimed the land as their own.

One tiny problem: the Spanish were Catholic, and the French were Protestant.

Once the Spanish heard that there were Protestants in their land, they packed up and headed back to Florida. Upon arrival, the Spanish slaughtered every single French person they could find. After they finished, they dumped the bodies in “The Inlet”. Now, this water way didn’t really have a name until the massacre. When they dumped the bodies, the water stayed red for three days with the blood of the French. After the horrible event, the Spanish named the surrounding water ways, “Matanza.” This may sound nice, but it translates to ‘slaughter’ in Spanish… yeesh.

After the Spanish reconquered Florida, they established St. Augustine. After a while, Britain bought Florida from the Spanish. Britain changed most of the Spanish houses into two story colonial houses. During the British reign, the Revolutionary War was in full force, and all the loyalists fled to Florida and hoped the fight wouldn’t come south. There was even a “fantasy” book written by a loyalist about what would happen if the British lost the war. A few years later, look what happened!

That is a basic history up until the civil war. This post was mainly just background information so you could understand what the heck I’m talking about when I say stuff like, “during the Spanish period,” and stuff.

Wildlife in the Galapagos

We saw so many islands and so many animals in the Galapagos. One main attraction of the islands is the giant tortoise. We saw those on San Cristobal, and on Santa Cruz. I want to share the story of Lonesome George the tortoise.

Five species of tortoises have gone extinct in the Galapagos. Including, the bree from Pinta Island, in the north section of the islands. One day, a group of naturalists found an adult male Pinta Tortoise when scoping out the island. They immediately brought him to Santa Cruz’s conservation center in 1971.

They made so many efforts to help him reproduce, but nothing worked. They tried to make him crossbreed with other species of tortoise, but he wasn’t interested. Lonesome George helped the Pinta tortoises receive the name “the rarest species in the world."

While on board the ship I watched a documentary. They had filmed the movie before the death of George. I was just about to comment on this while the movie was playing, but the narrator followed up by saying, “In fact, George died just 2 weeks after filming with him.”

Other animals that were very common include sea lions, marine and land iguanas, frigate birds, gulls, sally lightfoot crabs, stingrays, sharks, and sea turtles. One of the main reasons people come to the Galapagos is for the wildlife. The animals will come right up to you, because humans have never threatened them before, and they are therefore, not afraid of us. Sea lions and iguanas do not flop into the sea or scurry away when we walk towards them, they simply sit and pretend you aren’t there! Here are some pictures to show you what I mean; 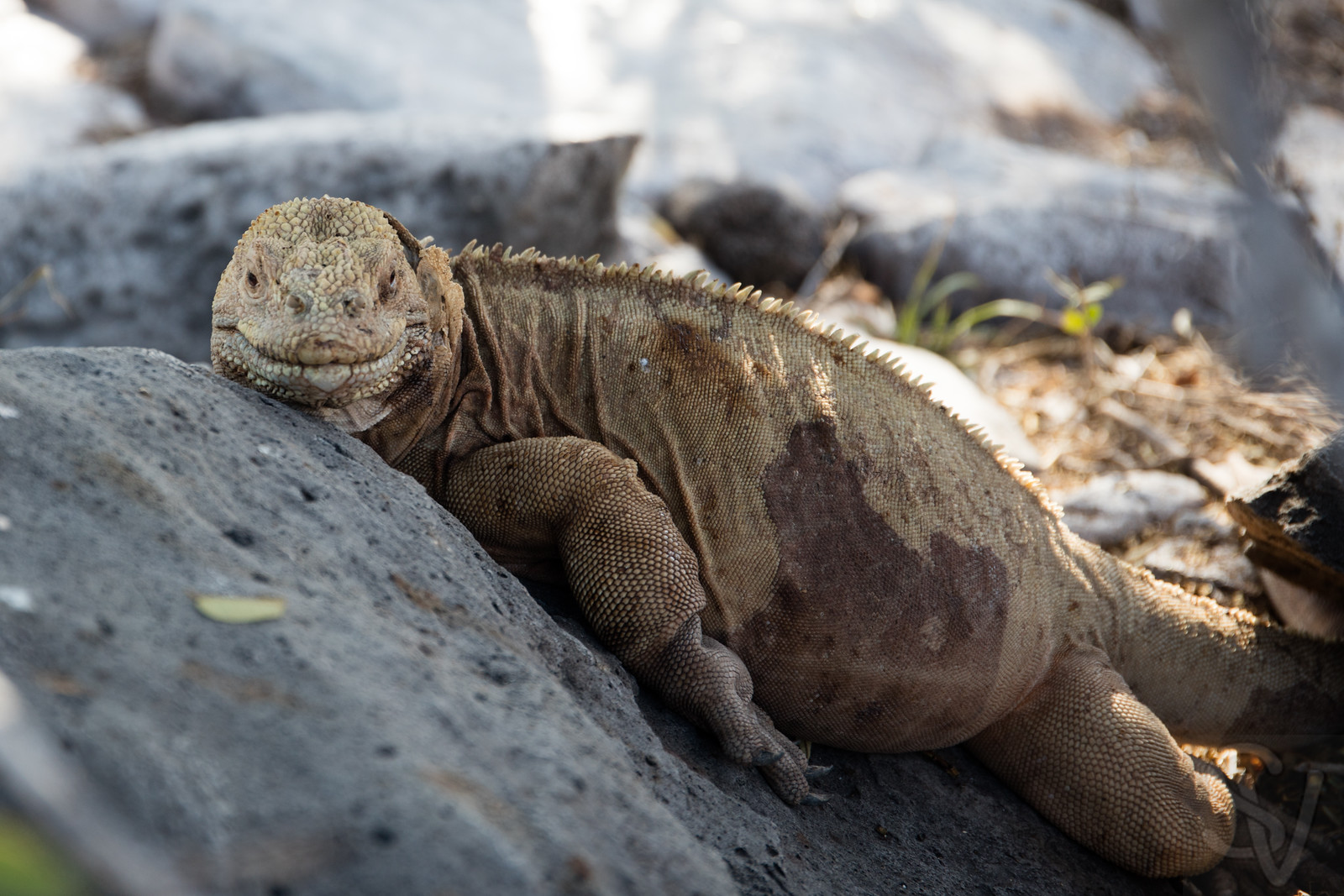