When you think about the roads in America, you hardly ever think of motorcycles. In my family, when we were younger, we would shout, “LOOK, A MOTORCYCLE!!!” whenever we saw one. In Vietnam, that seems a little unreasonable since there are over 4 million motorbikes or motor scooters in Ho Chi Minh. I’m not lying, that number is not an exaggeration at all. It is a statistic. Now, there are 9 million people in Ho Chi Minh. That is a lot of people with motorcycles.

There is another thing you can’t forget when thinking about Vietnam’s Motorbike City. People that drive the motorcycles think of themselves as pedestrians. They drive on sidewalks, in between cars, the wrong way on city streets, and in mobs as well. I learned that crossing the street is like playing dodgeball. Except, the balls are motorcycles, and they have a mind of their own. Red lights mean almost nothing. Why stop at a red light? It is easier to move when no one else is going! No one stops for anyone.

While the roads are a mess, the parking lots are worse. Now, there aren’t really parking lots. People park their motorcycles where ever they want and others will follow. If you want to go to a restaurant, you have to try and find a way to climb and weave through motorcycles because they are parked on the sidewalk. Also, unlike Thailand and Cambodia, there are no tuk tuks. If you don’t know what tuk tuks are, they are motorcycles that drive little carriage like things. 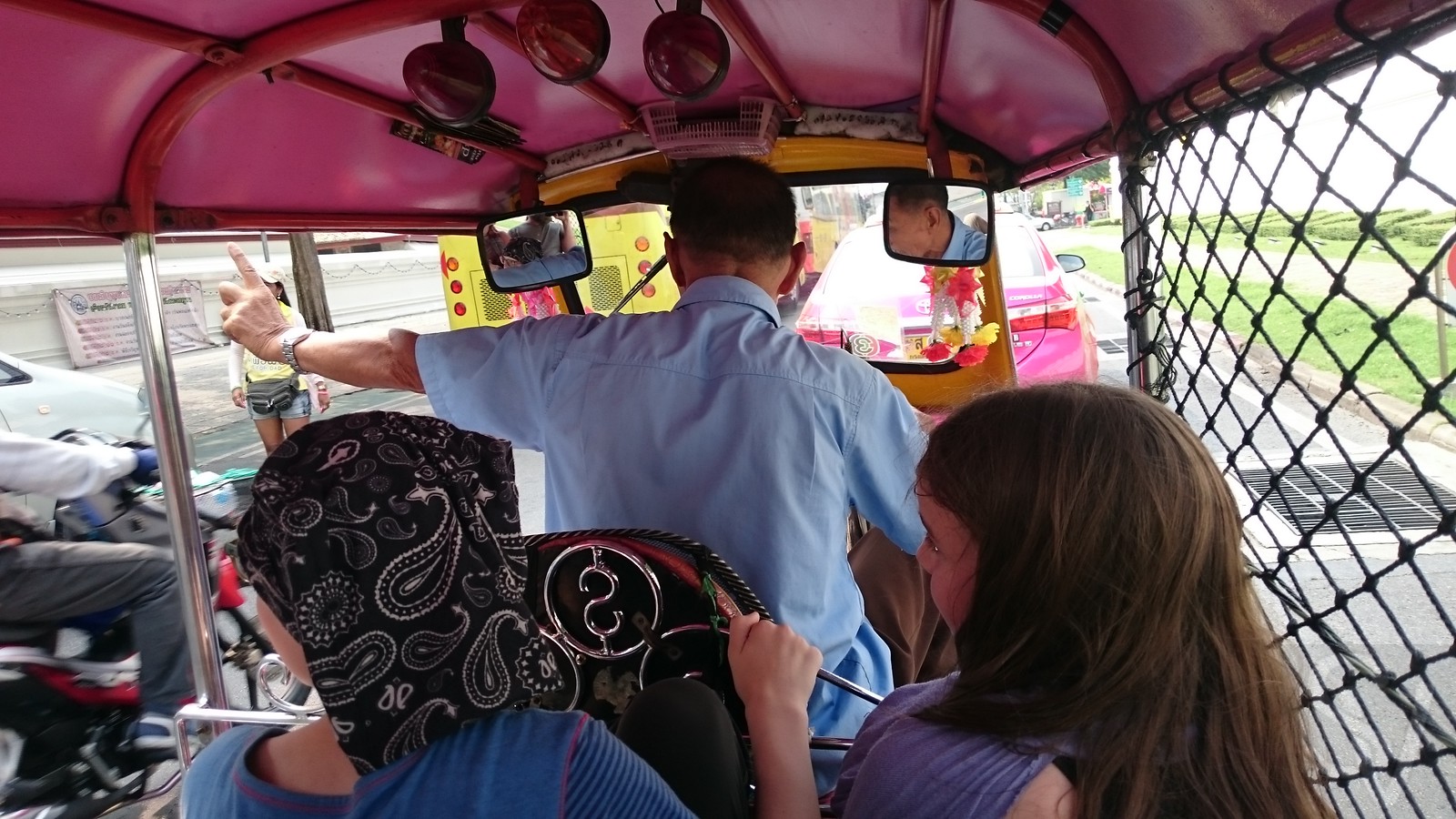 That means that if the place you want to go is out of walking distance, you have to call a cab. People in Southeast Asia really only use 5 seater vans. Now, because there is a driver, that means 4 of us have to cram into the back. The order in which we get in is usually Mama, then Tori sits on Mama’s lap, then Gianna, then me. Sometimes, if there is enough room, We squeeze extra tight and Tori and Gianna and I share two seats. I am often wedged against the car door, and if you open the door for me, I will fall out.

However, that is made up for with the amazing food that they have here. Until I went to Vietnam, I thought that Vietnamese food was mainly Pho. Pho is a noodle soup with different meats, scallions, beet roots, different types of broth, and often spicy sauce. It is absolutely delicious. However, people eat it for breakfast too. I don’t mind people doing it, but I don’t like it very much. I was also surprised to hear that Ho Chi Minh is more famous for another food, Bahn My.

I was excited for it because Bahn My is a sandwich with a slightly French influence, and I love sandwiches and French food. How could it possibly be bad? We had been walking earlier and we saw a Bahn My place with a line out the door. When you are a tourist and you find a line for food made up entirely of people from that food’s origin country, you know it is going to be good. So we ventured back to taht place for lunch. Sadly, it didn’t open till two o’clock. So we went somewhere else. We walked into what looked like a McDonald’s style restaurant. Their Bahn My was not good. We decided that we wouldn’t need to go back there.

That night we went to the Bahn My place, and went to eat in our hotel room. It was delicious. It was fantastic. Everybody just ate in silence. But then, “Oh, it’s spicy!” said Tori. I had noticed a little kick in mine but it wasn’t that spicy. I kept eating. Then, something hurt really bad. It burned and burned for six minutes. I was in tears. I had chomped on a raw chilli pepper and it had gotten stuck in my throat. I sobbed because it felt like there was an eternal fire burning in one spot in my throat. I didn’t sweat, and it didn’t make me cough or make my face red, like other spiciness had. Everyone (except Da) immediately took out the raw peppers from their sandwiches. I had already finished an entire coke and a bottle of water. I just sat and cried.

After that event, we watched Forrest Gump, and I finished my sandwich. All was well. Vietnam was quite an experience.