Being a Tourist in Paris

In Spain, we would just hang around the house most of the time. I mean, we would venture out into Valencina, Jerez, Seville, and Huelva occasionally, but we hung out most of the time. Paris was completely different. We were tourists. We tried to cram every exciting thing into a tiny two day span. It was exhausting, but I don’t regret anything.

We started our touristing by waking up at seven o’clock in the morning and putting on two layers of clothes. Two pairs of pants, one long-sleeve shirt, and a sweater for me. We did not really pack for winter and fall, so we had to improvise. It was pretty chilly in Paris. It was just starting to get colder for fall, and it was about fifty-ish degrees fahrenheit. That morning we set out on a mission: Louvre here we come. My dad said that the Louvre was impossible to see all in one day, but I didn’t believe him until I saw it for myself. As we approached the biggest (meaning widest and lengthiest) building I have ever seen, I started to believe him. We grabbed our tickets and went inside. 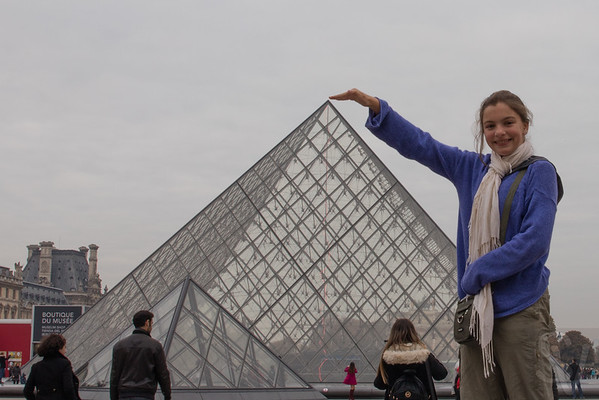 Gianna had been asked to make a list of what she wanted to see. She narrowed it down to two loose sections. Islamic Arts, and the Roman, Greek and Etruscan section. Mama made a very good suggestion: GET TO THE MONA LISA FIRST. That is exactly what we did. We high tailed it all the way through the Italian section, and through the giant crowd of tour groups. BOOM. There it was. We took pictures and made many pushes and shoves to get back out again.

We walked for the entire day, and by the end, we were extremely tired. The next day we got up later and skipped lunch because we had breakfast at noon. We then set out for the tower, the Eiffel Tower. I couldn’t believe it. We were actually going to see the EIFFEL TOWER!!!!!! I was overjoyed at the sight of it. We didn’t go up in it because we weren’t that interested, and the very top was closed. After hanging’ around, we traveled to the catacombs. We waited in line for an hour and a half, but didn’t make it in. It closed entrance before we got in. Overall, we tried to do absolutely everything, and we had a great time.