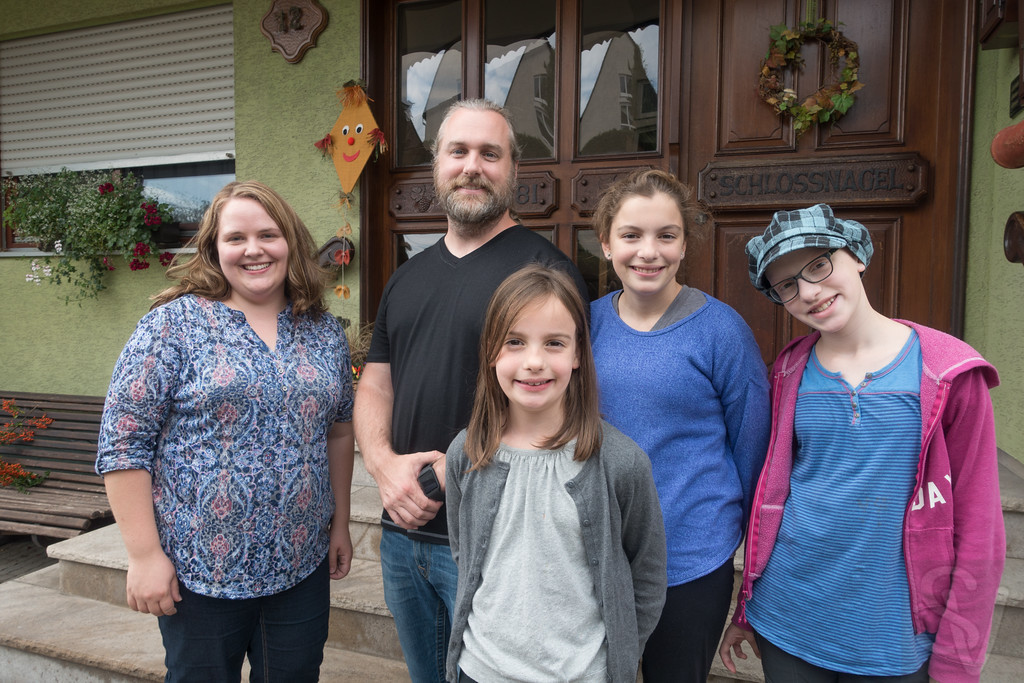 Today, on our way back to Konstanz from a wonderful wedding in Stemwede (congrats Heinrich and Lena!), we passed through Repperndorf. Now, most Germans I've talked to have never heard of Repperndorf and that's quite understandable as in 2011 they registered a cool 660 residents.

It has recently been pulled into the larger city of Kitzingen with its 21,000 residents making the name Repperndorf even more obscure.

So, what's so important about Repperndorf? It's where we Schlossnagles are from. Of course, at some point after our immigration to the United States we flipped the last two letters of our last name to Schlossnagle from Schlossnagel. 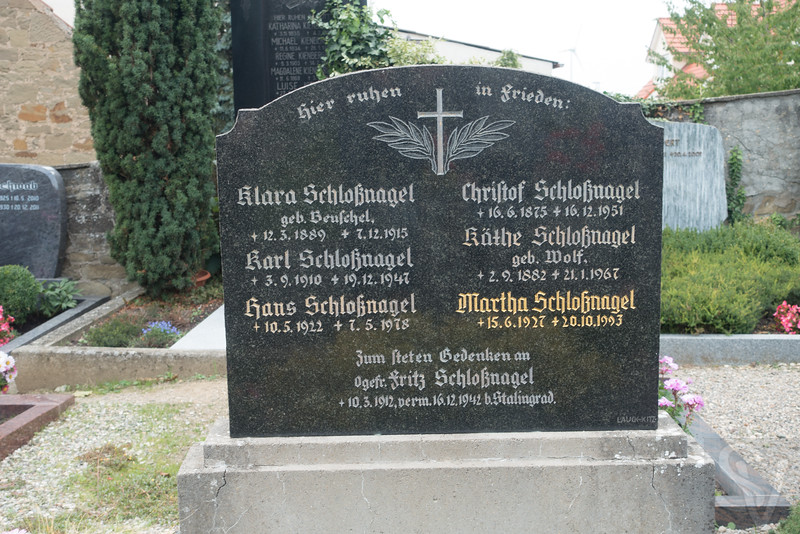 Honestly, it makes no sense and we don't know why, but I always joke it's so that no one would know we were German. The long s sound used to be written as the latin long s and followed by a 'z' which leads us to our Germanic character that is that magical "B" looking letter people always mispronounce... it's a ß (see the long 'f' + 'z' shape?) and it makes a long/double "Ess" sound. Making words like "straße" (street) fun and beautiful and words like "Schloss street" just magically fun to say correctly: "Schloßstraße". That's a tangent, but in the olden days our earliest known ancestors spelled the name Schloßnagel and do so even to today. 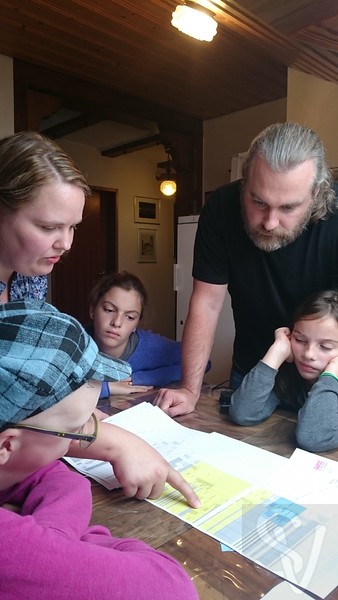 Schlossnagle (including its spelling variants) is one of the more rare long-lineage family names on the planet. Today there are only about forty nuclear families that bear our name. As I have three daughters, future generations of Schlossnagles are not likely to stem from my blood.

We found Repperndorf due to the wonderful invitation from Julia (Schlossnagel) Then. She excitedly welcomed us, shared lots of information about the research she has done into the family (over the last 21 years) and gave us a personal tour around the village of Repperndorf. Such hospitality and excitement... it's like we were family! If we're reading the family tree correctly... Julia and Theo share a great-great-great-great-great-great grandfather Martin Schloßnagel and are seventh cousins. Navigating family trees can be challenging!

The first occurrence of the name in written history is from 1552 and due to the way German cemeteries work (no real preserved headstones) the only records are in church birth and death notes. We learned that in Germany grave sites are recycled after ten or so years and those previously buried have "taken to Earth" so the spot is ready for another deceased. Quite different (and quite a bit more sensible) than the way we Americans do it.

The girls very much enjoyed the city tour and we all marveled at the casual pre-1492 ages of buildings in the area. As we said to each other: that was literally built and here before the New World was discovered (historical inaccuracies of who discovered the New World when aside).

I suppose anyone who has German heritage has a strong chance of having ancestors who fought for the Nazis. At least one Schlossnagel, namely Fritz Schlossnagel, fought and fell on the German side of the (failed) siege of Stalingrad. I think we all had negative, uncomfortable and conflicted emotions. This was intensified when shown some 70+ year-old soldier pins, armbands and coins. It's so difficult to think that these people had children and parents and loved each other and yet fought for a heinous cause. The human condition is so flawed.

While in Berlin, we visited the Memorial to the Murdered Jews of Europe (also known as the Holocaust Memorial). This is an absolutely fantastic memorial in complex ways. It takes on different moods during different times of day as shadows shorten and lengthen and reflective sky colors change. It is deceptively vast and quite eerie when walked. Each walk of its uneven paths results in a sense of unease and awe that inspires a deeply pensive and reflective frame of mind. On our trip from Berlin to Konstanz and on several road trips since (including our ride into Repperndorf) we have been listening to an audio book of the Diary of Anne Frank. Seeing the memorial less than a week ago, mentally digesting Anne Frank's experience and contemplating that our not-so-distant ancestors were some of the perpetrators that led to its need evokes feelings that are deeply unsettling.

At least one Schlossnagel fell in WWI as well which, while tragic, is so much less complicated to navigate emotionally.

Also, some of the first recorded names in the 1500's were related to going to war (presumably in the Second Schmalkaldic War in 1552 between Protestants and Catholics). Most people who went to war back then didn't come back, so it's likely one of us died there too.

A duality of Theos

Perhaps the most interesting and surprising part of the trip was meeting Julia's father. For a long time, Theo thought he was the only Theo Schlossnagle in the world. Julia's extensive research proves that to be very likely, but there is certainly a close call. Jula's father is Theodor Schlossnagel... so that happened. 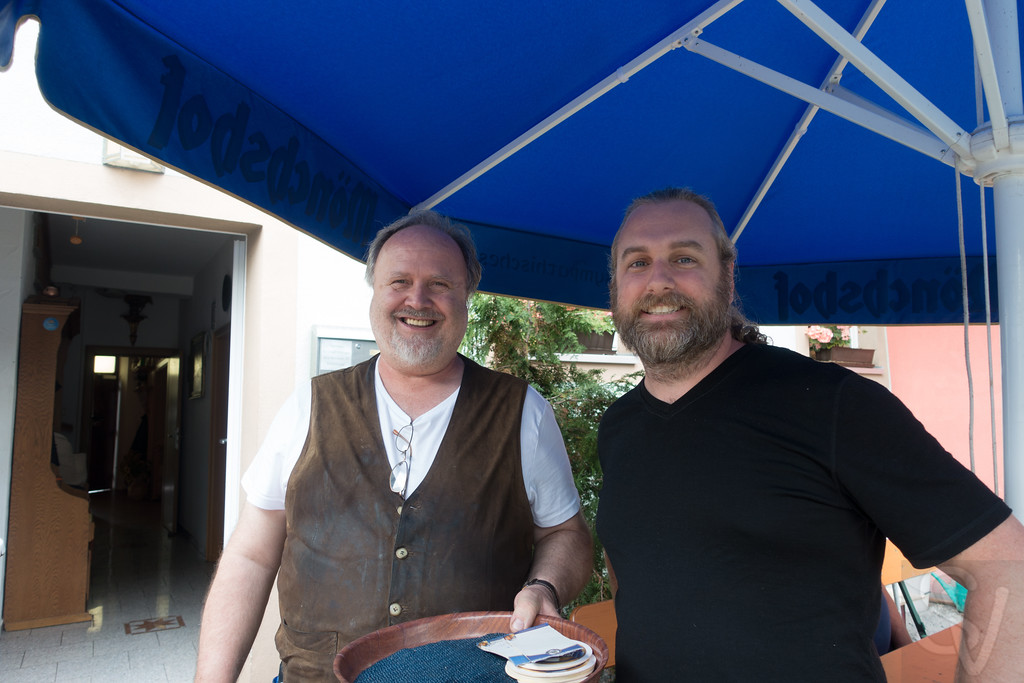 There are too many pictures to sensibly put straight into a post, so we welcome you to peruse our Reppendorf gallery.