No weddings for us here, but just three days in to our stay and I've had some old things and new things, borrowed and blue things. 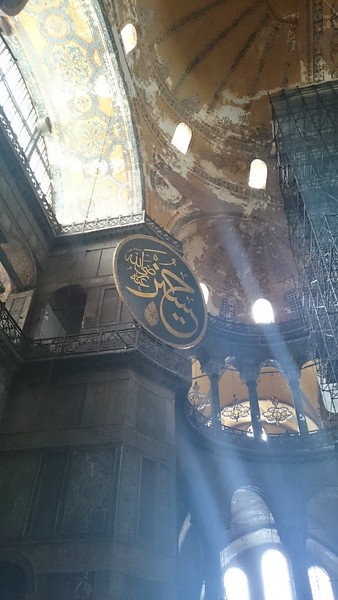 From the moment I read about it, I knew I wanted the Hagia Sophia to be one of our first sights to see in Istanbul. The building is old and very, very big. The main building, as it stands today, was built in the year 532. (It had been built twice before but had burned down in riots.) It began as a church for the Eastern Roman (Byzantine) Empire, then converted to a mosque when Constantinople fell under the Ottoman Empire's control (and the city received the name Istanbul). It has been a museum since 1935.

I can barely conceive of construction projects in 1935, let alone 532. To be in that space and wonder about how all the marble was laid and the columns righted, how many feet have crossed the threshold and how many ceremonies were held was something I wanted to do to start this journey. The size of the space was a bit obscured by the scaffolding in place for restoration work, but the soaring height of the domed ceiling and the winding stone ramps to the upper level did their part to convey this is no ordinary place.

If you've ever been to Las Vegas, you've probably been struck by how incredibly much is there. How much concrete and steel and glass, how much water and electricity it must take to run that town, how much food and money and everything there is. In the Hagia Sophia, I was struck by how much marble and gold and tile have lasted well over a thousand years, and by how much human labor it must have taken to build, and by how much history those walls have endured.

We're staying in a hotel decked out with everything new. It's in a neighborhood that is much more for urban Turks than American tourists. We're adjusting to new habits and ways of living in what will be a year-long process, I'm sure. For example, I've "done laundry" everyday since arrival and expect to do it every day until we get to a washing machine in Greece. We're getting sweaty and stinky and have only enough clothes for three days in this weather, so Bathroom Sink Laundry Time it is. Other new things: lahmacun (aka Turkish pizza), purses for the girls, stray/community cats everywhere, shopping for toiletries through a language barrier, noticing one child's affinity for foreign languages, doing sit-ups and push-ups and air squats every darn day, and operating as a family of six.

Clothes have already been borrowed. Minecraft ideas have been borrowed too, leading to a discussion about who's copying who and why that's so not fair! and so on. That's about it, but it's only Day 3.

The Blue Mosque, officially named Sultanahmet Camii. The blue of the Bosphorus as it laps against the Golden Horn of Istanbul. The blue sarong Michelle was made to wear around her leggings while in the Blue Mosque (cross-file with Borrrowed).