Because of the way different pieces of our round-the-world logistics worked out, we had a five-night stay in Johannesburg. The staff at Kirkman’s Kamp was shocked we were staying there that long, and only slightly less shocked when I clarified that our hotel was actually in the city’s northern suburb of Sandton. Meanwhile, I was shocked at their shock. Why would anyone think five nights was too long in one of South Africa’s most important cities?

Our flight from Kruger to Johannesburg was short and turbulent, but long enough to add 2 barf bags to our count. We made our way to the Gautrain station to buy our passes and board the train to Sandton. When we exited the station, we saw a shiny, modern city. Google Maps said it was a 12-minute walk to the hotel, so we started hoofing. As has been the case everywhere else we’ve visited in Africa, the sidewalks were under construction. It was 97F degrees and sandy. We passed two Radisson’s on the way, and I began to regret my hotel decision. Then, as we checked in, we had trouble with reception. We finally got it sorted, but they must have mixed up our reservations. Theo had a splitting headache and took to bed as soon as we checked in. The extra mattress they provided for Tori was stained and gross looking. The kitchenette was simple. The apartment was clean, otherwise. I felt alright and up to the task of getting things done. I went back to reception to ask for dinner recommendations and an outlet adaptor. The receptionist was kind and helpful. When I asked about taking the Gautrain in to Johannesburg, she looked at me with alarm. The receptionist and a taxi driver/guide in the reception area told me that you need an escort or guide to go there, for safety. The guide offered to take us and gave me his number. Then I noticed some Americans outside and talked with them. They were on their way to the airport, having spent three weeks in South Africa. This taxi driver had taken them to Soweto and the Apartheid Museum today. It sounded like something we might do.

I returned to the room to call for dinner delivery, but I couldn’t get the phone to work. I went back to reception, where she let me use the phone. I placed the order, then paid for our rooms. I returned to our room and realized there was a billing mistake with the hotel. Then our food arrived, but instead of the 2 large bottles of water I ordered, I got two small bottles. Frustrated, we set out the pizza anyway. I looked for plates and found only four. Then I realized there was no dish soap. That was it. I lost it. The WiFi didn’t work. The cell signal was poor. The apartment felt crammed, and I couldn’t get food delivered correctly. Even the TV didn’t work right - it would be fine until it just turned blue and had to be turned off and on again to get the program back. I went to bed that first night very frustrated and very tired, feeling for the first time since leaving the U.S. that I didn’t at all want to be where I was. 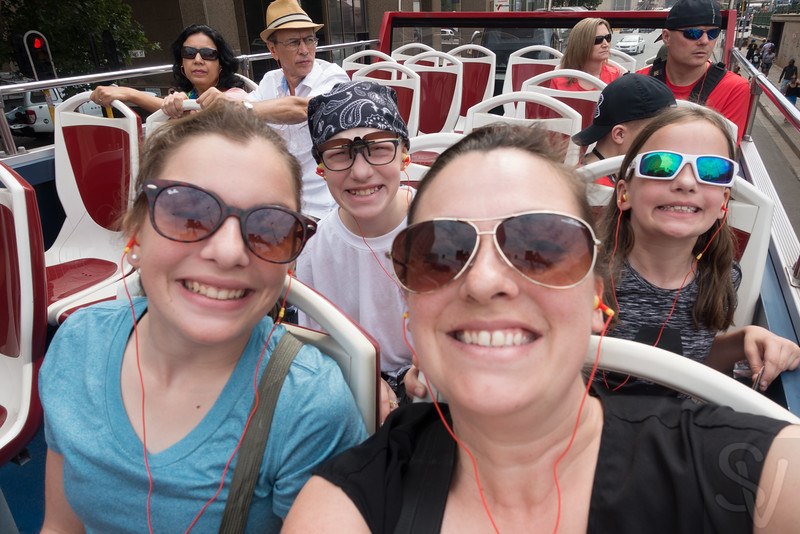 Our original plan for Johannesburg was to do some sightseeing, but to spend more of our time doing school work, running final errands before India, and relaxing at the pool. As it turned out, our hotel apartment was a good base for this, poor WiFi not withstanding. Sandton is full of big-name corporations and high-end shopping. We visited the Sandton City Mall several times for lunch and shopping. Determined to experience at least a little of what Johannesburg proper had to offer, I booked us on a hop on/hop off City Sightseeing bus tour. Those red, open-top double-decker busses run tours in many major cities, and I had wanted to do one for a long time. As it turned out, this was probably the best way for our family to visit Jo’burg. 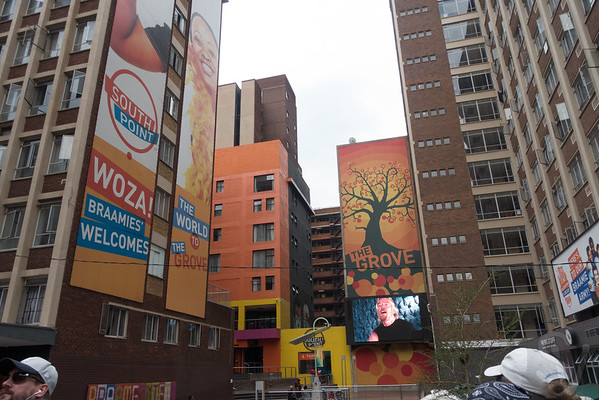 The city is far more run-down than I expected. Even though I had read that despite the drop in crime, the city is not really a tourist destination - which is why the recommended hotels are in the suburbs. The streets are narrow, the drivers are crazy, and everything is dirty. It looked economically depressed, and I was surprised. Later in the tour, we drove through an economic revitalization zone. That was encouraging.

We listened to the audio guide on the bus and learned that Jo’burg was founded as gold mining town in the mid-1800s. If there hadn’t been such a valuable resource here, there never would have been a major city here because it lacks something all other major cities have - water. It is an inland city with no river or lake or other natural water source nearby. (The country’s drought put major stress on Johannesburg’s infrastructure; several hospitals were without water and had to turn away patients.) The gold mine barons placed the mine dumps on the south side of the city, away from the white and wealthy downtown. Later, the black townships would be sited south west of the city, with the dumps forming a physical and visual barrier between the two.

The tour continued out to Gold Reef City Casino, where we boarded a small van for an excursion through Soweto. This area is a major part of the apartheid system. I found the history to be really distressing and saw many parallels to the history of American racism. I was most moved by the Hector Pieterson Memorial, which honors the students killed by police while protesting (among other things) the government’s rule that schools would no longer teach in English, but in Afrikaans - the language of the oppressive apartheid system. The girls seemed to get the most out of that stop, too.

We drove down Vilakazi Street, where Nelson Mandela and Desmond Tutu have both lived. We passed a few other landmarks and listened to the stories. The tour was over-crowded, though, and I had no view out of the bus. I had hoped to go inside Nelson Mandela’s house and visit the Apartheid Museum during our Jo’burg stay, but the timing was just not there for us. As we finished the tour on the big red bus, we went by Constitution Hill. This is another important place in South Africa’s history, but it was late in the afternoon and none of us were up for extending our tour. Still, it was a good day and a better option than staying at our hotel or in suburban Sandton exclusively.