Dinner in the Dark

As for sightseeing and other activities in Ho Chi Minh City, I didn’t have my heart set on anything in particular. So, one day in Phnom Penh, I had the girls read our Lonely Planet guide to Vietnam and peruse TripAdvisor to find some things they’d like to do. Zoe came in with an incredible idea - eat at Noir, the #1 rated restaurant, which just so happens to be in complete pitch-black darkness.

Excuse me? Did she mention blindfolds? She did? Well, then. NOPE.

Seriously, I did not want to do this. I felt tight in my chest just thinking about it. I am particular about my vision. I like it. I want to keep it. I am afraid of losing it. But, I didn’t want to say no. So I said yes. 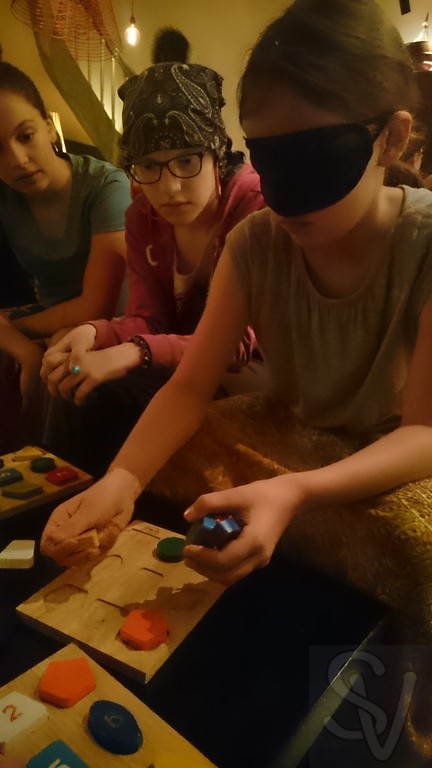 We went to Noir on our last night in Vietnam. You are greeted, seated in the dimly-lit and beautifully decorated lounge, offered a welcome drink, then given your briefing. There are two set menus: one Eastern, one Western, three courses each. You are not told what the dishes will be, but you are reassured that there are no “unusual or strange” ingredients. You are asked for your drink orders. Then, you are given a game to play, and blindfold, and shown how to play by one of the sighted-but-hearing-impaired staff.

We were escorted to the dining room. At the entrance, we met our waiter. He has a visual impairment, but spoke English and was very clear in telling us what to do and what was happening. He put us in a line, calling us by name and having us hold on to the shoulders of the person ahead of us. I held his shoulders. We walked into the dark - completely dark - dining room. I felt my eyeballs bulge from my head, straining to find a little light. As we shuffled along in the dark, I heard a woman speaking French somewhat loudly and jumped out of my skin. For a moment or two, I felt like Jodi Foster in “Silence of the Lambs” and I wished to high heaven that the French lady would just be quiet until I got to my seat. It was hard to concentrate on following my waiter with all that noise. (The truth is, she wasn’t that loud, but our perceptions vary when our usual balance of sensory inputs changes.)

We were seated, and the table layout was explained. We were asked to always keep our cutlery and drinking glass in the same place so that our waitstaff could safely serve us. We were advised to close our eyes, because trying to see in the dark would actually cause strain and possibly a headache.

Once I was in my seat, I was more comfortable. I listened - the French lady wasn’t so loud anymore - and I was relieved that we were not blindfolded in the dark. That was part of how I imagined the experience when Zoe first described it, and I think it is what I most strongly reacted to. The first course had two soups and two salads. It all tasted delicious and I had no idea what it was. We all guessed that one of the soups was a chowder, but it was a cream of taro soup. Second course included three meats and a vegetable. We all guessed correctly on the salmon, the pork belly, and the vegetables, but we all missed the duck. I thought it was beef. Zoe thought it was some kind of organ meat. Theo wasn’t sure what it was. The dessert course had three dishes - a sorbet, a pudding, and something else. We guessed the sorbet as lemon, but it was actually tamarind. I don’t even remember what the other two were - I actually didn’t like them.

In some ways, the lack of sight enhanced my sense of taste. However, I was both really uncomfortable and really hungry, so I didn’t savor my food. I would go back to a dark dining restaurant to try to guess the food. I like that kind of mental challenge. When the restaurateur sat with us after dinner to go over the menu and reveal our meal to us, he mentioned that wine critics have been stumped by the wine pairings and that when people are served kiwi fruit without light, they almost never guess what it is. In that moment, I tried to conjure the taste of kiwi, and couldn’t. My sense of kiwi is almost entirely visual!

In our debriefing chat with the restaurateur, I asked which came first for him: the dark dining or the social mission of hiring visually impaired staff. He said it was a mixture of both, but that the dark dining idea really came first. He and his partner went to a similar restaurant in Malaysia and decided that they would open one in Vietnam. Their calling to offer job opportunities to people with visual impairments is something that means a lot in Vietnam, where over 95% of people without vision are unemployed. There is huge social stigma here. People with hearing impairments fare a little better - around 60% of them are unemployed. The next venture of the owners of Noir is a silent dining experience, staffed by people with profound hearing loss.

We said our goodbyes and caught an Uber back to the hotel. I did leave with a headache, but I am so glad we went. It was a dining - and living - experience I will never forget.