Pushkar is a very special city in India. It has only fourteen thousand residents and yet swells to nearly a million people during the month of November as Hindus from all walks of life descend in pilgrimage to the only temple of Lord Brahma on planet Earth. Hindu mythology is quite complicated and we got many pieces of many stories explaining the city and its many holy spots.

As this has been going on for a long time, when earlier pilgrims arrived during this festival time, they notices that there were a lot of camels and horses (as that was how most of them got there in the time before automobiles). Well, if you’ve got a lot of people with a lot of camels, then why not start trading.

The Pushkar Camel Fair was born — the largest gathered cultural festival in all of India.

Our trip to Pushkar coincided with the Pushkar Camel Fair and we camped in “luxury” tents on the outskirts of the city. The accommodations were quite nice, but alas not luxurious; after Kirkman’s Camp I now understand what that actually looks like.

One full day and two nights in the camp gave us a whirlwind tour of Pushkar and the related festivities. We toured the fair and then, after a break at camp, we went back to tour the holy lake.

The fair was crazy.

There are animals pretty much all over the place in India; walking through town, blocking intersections, etc. Here there were nearly a thousand camels and easily that many horses. The government rules are that once you end you can’t leave. They try to build a critical mass to make the fair bigger and more effective. Luckily, after our camel rides in the Sahara earlier, the ladies had no inclination to ride a camel.

Almost everyone at the fair (aside from tour guides) is not actually from Pushkar,

Many of the pilgrims here are for very remote places and the pilgrimage to Pushkar is often a once-in-a-lifetime experience. When you add all this up, you get a lot country bumpkins that have never seen anyone that doesn’t look Indian. It quite a trip. There are vendors everywhere selling things from candy, to cookware to camels and there are even carnival rides. Not one of my lovely children asked to go on a ride, but I nevertheless told them that no rides would be had given the propensity for safety regulations to be overlooked in this country (can we say foreshadowing).

Our tour of the fair ended up with us watching an interesting local game that looked like a combination between bowling, tag and dodgeball: locals vs foreigners.

By foreigners they meant tourists. The only reason we saw the game was that we showed up early for the camel decoration judging. Unfortunately our seats were rather porch led to less that compelling pictures. The camels were wild!

Heading back to the camp, the heat was starting to get to us. We retired to our tents to relax, but after a few minutes I heard a commotion. Several of the staff were screaming in Hindi and running. There was a tour group comprising many elderly people and I figured that, in the heat, one had collapsed and there was a medical emergency… I was wrong.

Remember how the safety regulations (if there are any) are rarely adhered to around these parts? An air-conditioning unit in one of the tents sparked and the tent went up in a blaze of glory. 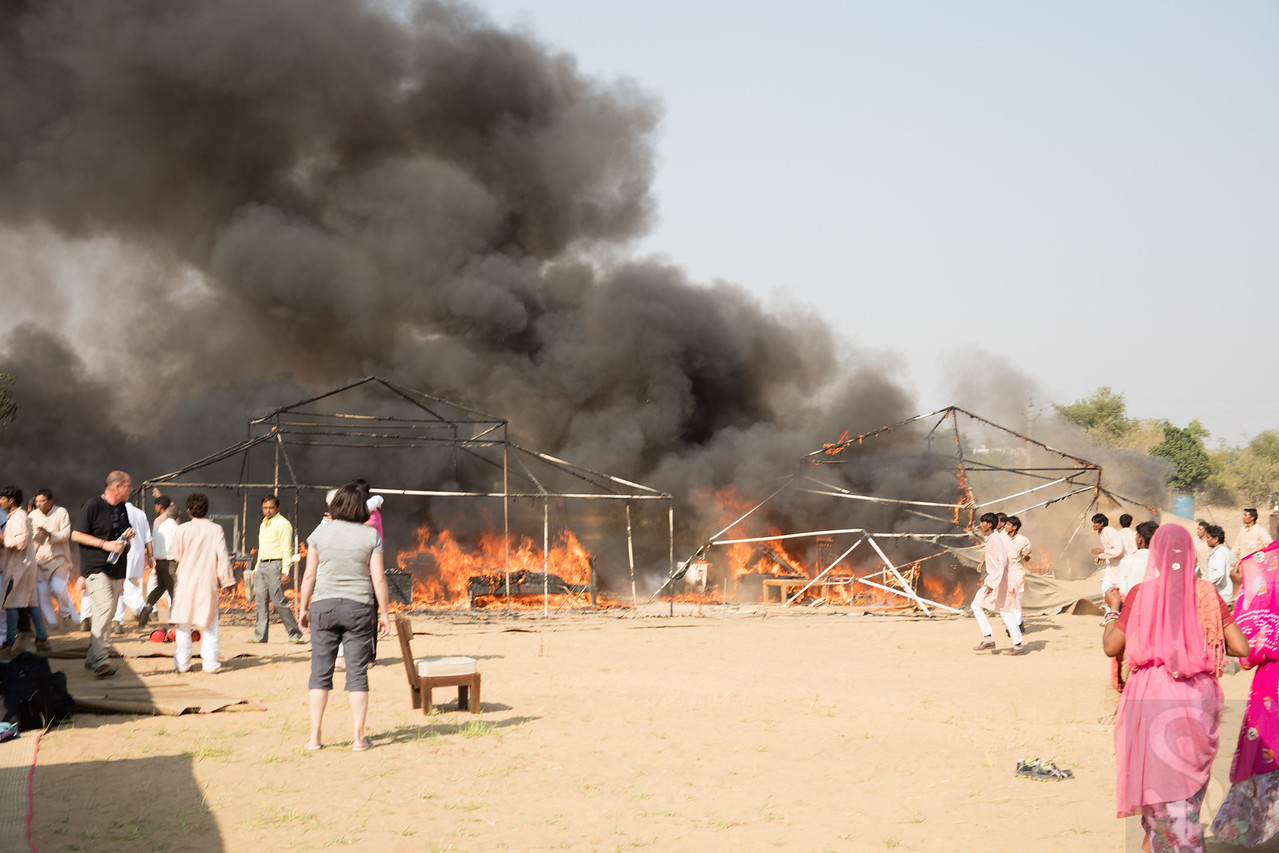 The tents here were very clearly not fire retardant and comprised of fuel and ample air. Luckily, the tent was unoccupied, but a few minutes later the tent next to it caught and went in a flash. That second tent had four gentleman sleeping in it, but thankfully they were warned in time to remove themselves, if not all their belongings, to safety.

I was early pining for a gentle breeze to take the edge of the slightly uncomfortable heat. We were very fortunate that all was still, I’m confident that the whole encampment would be caught like prairie grass and burned in minutes. Everyone was a bit unsettled by the events and many of the campers elected to find other accommodations (as if their adherence to safety standards were better).

When we went back into town, we toured the temple of Lord Brahma, walked half of the holy lake and then took the girls for henna from a friend of our guide. We had hoped to catch a balloon light show with an accompanying concert, but while it was on the event schedule it did not transpire. We returned to camp, slept lightly and departed for Nawalgarh.

If you get a chance to go to Pushkar, do it during the camel fair and have a blast — but don’t catch on fire. 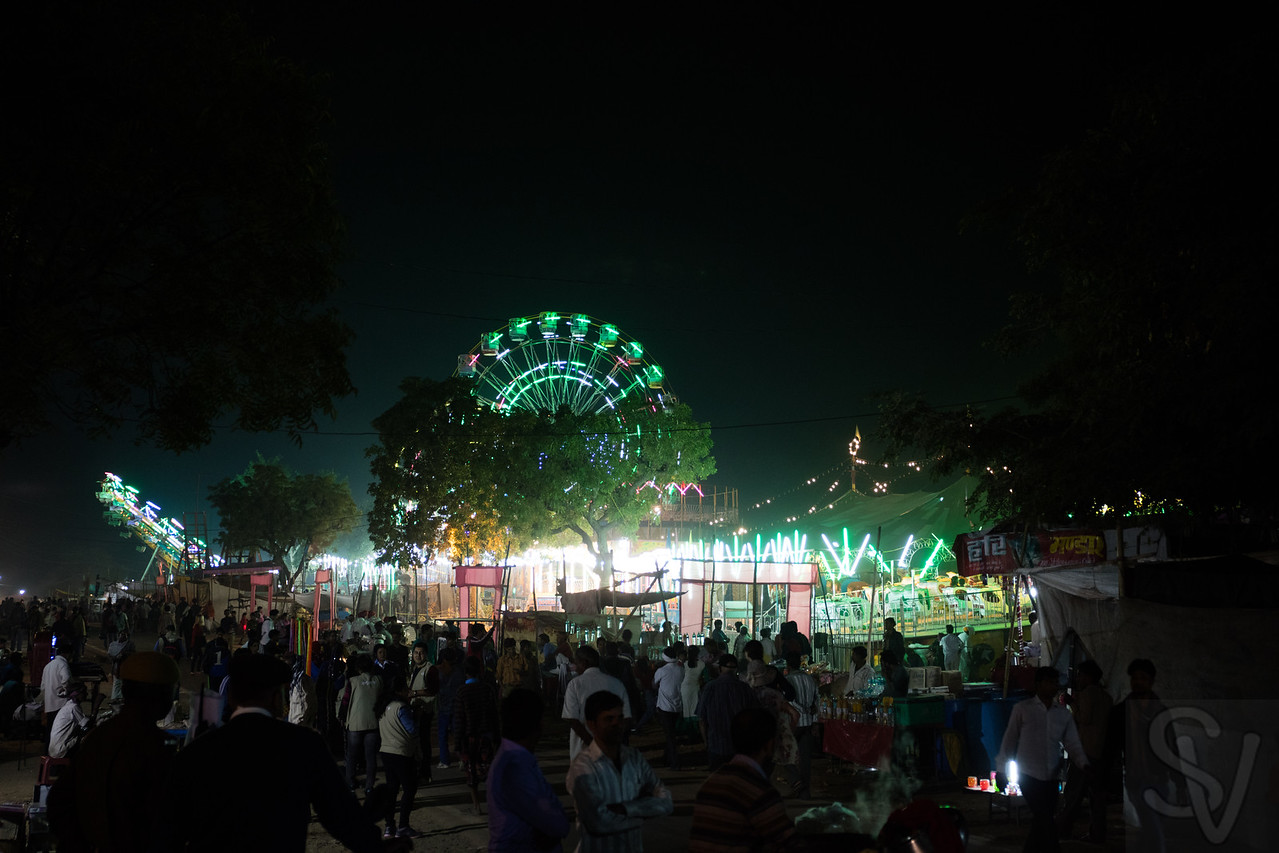