This marks the first time that I have visited Paris in October. While our stay was very brief, it was filled with enjoyment. We had four things we wanted to do and we managed to do two of those and a few very special things not on our check list.

Gianna loves art as does Lisa, but it is clear to me that the rest of us thoroughly appreciate it as well. We hit the Louvre like a tourist wrecking ball. As Lisa and I had visited here on our previous trip we knew that without a vicious plan of attack you’ll see maybe 0.5% of the Lourve instead of the 2% you might hope to achieve in a single day’s visit. While I’m sure that if the Lourve was closed with no visitors, a decent athlete could run its halls in its entirety in a single day, though they obviously would not take in or enjoy any of the art. The Louvre is a dangerous and wicked place for those that want to see all there is to see… you will always fail. As I told my girls, if you really want to see the Louvre, spend a year in Paris and come once or twice a week every week for a year… at that pace, you might even enjoy it and you’ll be able to see almost everything you care to.

The young ladies, particularly Gianna and Tori wanted to see the Mona Lisa. So, first step: storm the Mona Lisa. I mean literally, moving quickly, no time to gawk at anything. Follow the signs, head down, jostle back politely when jostled and PUSH to the front of the tourist hive that is like rough water against the dam of soft velvet rope in front of this mysterious painting. About fifteen minutes in we had seen it, got some pictures and were out of the throng. Why first? Because after you’ve spent some time here you just don’t have the energy to attack the problem with vigor.

The rest of our three or so hours in the Louvre were wonderful and relaxed. Gianna got to choose the areas we visited: “Egyptian,” “Etruscan, Roman & Greek,” and “Islamic Arts” to which we added European paintings. We, of course, didn’t tour the sections exhaustively. That can be overwhelming for an adult, more so for three children and even more so for an adult with three children. We flowed through them like a lazy stream. We didn’t visit every rock and were comfortable getting stuck from time to time in a little whirlpool here and there.

All of these sections were amazing and, in particular, the Islamic Arts section was fantastic given our recent stay and many tourist activities in Seville, Spain. In Seville (and Córdoba) we stood witness to wonderfully preserved artistry from Islamic influence and now got to see it within the curated halls of the Louvre in a personal context that I believe would have otherwise eluded us.

The paintings were, as always, amazing. One could get lost for hours in a single room of the Louvre. Truly the works of masters; you can stand and stare for hours processing the feelings you see as you lose yourself in the works.

After the Louvre, we walked past the bridge that used to have all the love-locks on it. The weight of the locks was causing structural problems so they setup a new shore-line location for people to use instead. Seeing it brought back a lot of memories of Lisa and my first visit to Paris. We went to stop by Berthillon for ice cream on the the little Island only to find that they were closed for a few weeks. So disappointing, but as they stock basically every café in Paris with ice cream we went to the café across the street to share the experience of Berthillon Glace with our children. Much enjoyment, but it lacked the panache of the original.

And old and dear friend of mine lives in Paris and we got to meet up with him and his wife. They both had met Zoe before (so long ago that Zoe has no memory), but this time they received all of us in force! We met at his delightful place in Le Marais with a quaint view of the Eiffel Tower. Brief chat and splendid drinks had us heading to dinner at a small restaurant nearby. Delicious food, good company, and fluent English speakers put everyone at ease. The pleasure of seeing familiar faces on such a long road trip produced smiles all around and an easiness that is foreign and hard to come by. The eyes and ears develop a yearning for the familiar in a way that cannot be understood by those surrounded by it.

Zoe desperately wanted to see the Eiffel tower, so we hit that the next day. Lisa wanted to travel there via the Seine on a boat taxi/tour. We failed to navigate that successfully and ended up taking the RER from near Notre Dame to the Eiffel Tower. Our stay at the tower was brief; we got some nice pictures and Zoe told all of her friends back home she was in Paris at the Eiffel Tower. We feigned for the line to the top of the tower (but the top was closed that day) and quickly abandoned that to go to Catacombs — my top item. 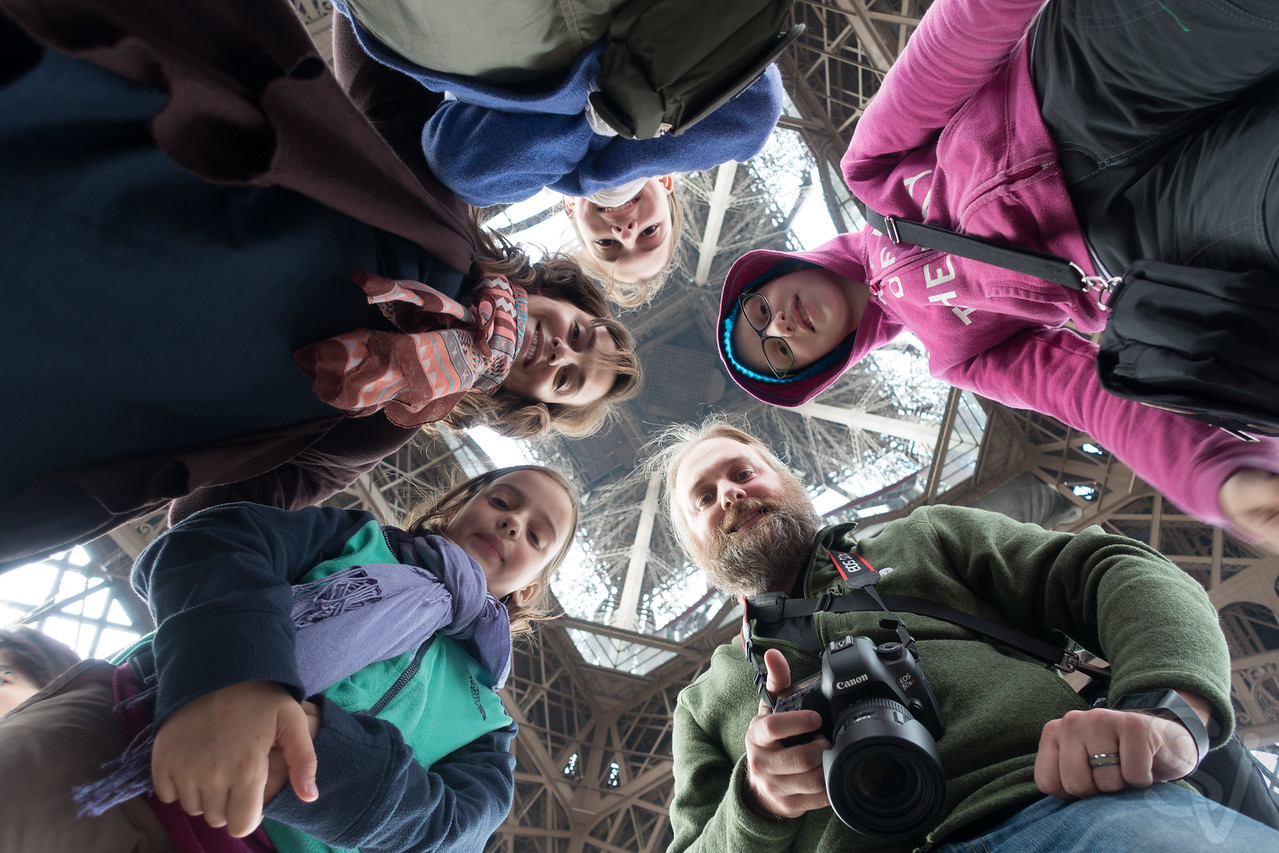 We got to the catacombs around 16:30pm and they close at 18:00. We were told that we might not make the entry because we were so far back in line, but we thought we’d chance it anyway. I really wanted to see them and apparently my ladies understood that and were in it to win it! We stood in line for nearly 90 minutes through rain and wind. All in all the experience was miserable, but oddly no one was impatient or angry. I am amazed how a 13 year old, 11 year old and 8 year old could handle themselves for 90 minutes in completely unsatisfactory weather without a single complaint. Zoe and I told stories from dinner the night before that the others hadn’t heard. Eric, as a teenager, used to break into parts of the Catacombs for parties and told stories of running from police and coming up in weird places. Wild!

Alas, we were at the front of the line and subsequently denied access. That’s right, they shut down as we were about to enter and turned us away and the nearly 100 people behind us. We stood around to make sure that the decision was final, but others got angry and rude. People just doing their job; it is what is it. Still we were left with the cold (literally) reality that we had wasted 90 minutes of our precious time in Paris waiting for the one thing that I wanted to do and failed. How does one recover from such a blow? Sushi.

Across the street from the Catacombs sits a little place called Akko Sushi and it was so completely satisfying that even I as placated. We retired to our apartment via a wine shop and went to bed completely content with our ventures in Paris. I will return at some point to actually visit the Catacombs.

Departing on Back to the Future day

We left Paris on October 21st, 2015 (Back to the Future Day). On our way to the parked car (about a mile from our apartment) we saw this in the street. Experience complete.

We took a lot of pictures in Paris, have a look!