Phnom Penh was our second and final stop in Cambodia. I have to say that I love this country. The cities are rather small here providing an atmosphere that is hectic but quaint. We stayed in a small boutique hotel called La Librairie and it was comfortable. The hotel catered mostly to French tourists and had a pleasant little restaurant run by a French chef. Everything we at at the hotel was either good or great.

The staff was courteous and friendly and the location was fairly good. I had worried a bit about our experience given that we just searched the Internet and booked this place several months ago, but I couldn’t be more pleased with our experience here. It was just what we needed. The balcony overlooked street 184, which is really nothing special, and provided a wonderful place to sit, relax, and read.

I think the word that best reflects my stay in Phnom Penh was comfortable. It was mixed emotionally, but I covered that in another post.

The most frustrating part of all these cities (Siem Reap and Phnom Penh) is their lack of walkability. Traffic is crazy with motorbikes, cars, and tuk-tuks everywhere; they drive on the damn sidewalk. There is a constant fear of getting clipped or out-and-out plowed down here as a pedestrian. The streets and sidewalks are rather poorly maintained, but since leaving Europe, Singapore was the only city I’ve visited that had properly maintained infrastructure… so I’m fairly used to it. I like to walk, but with five people, three of them kids, the risk is high and the stress is even higher. It makes anything but the shortest of journeys untenable. 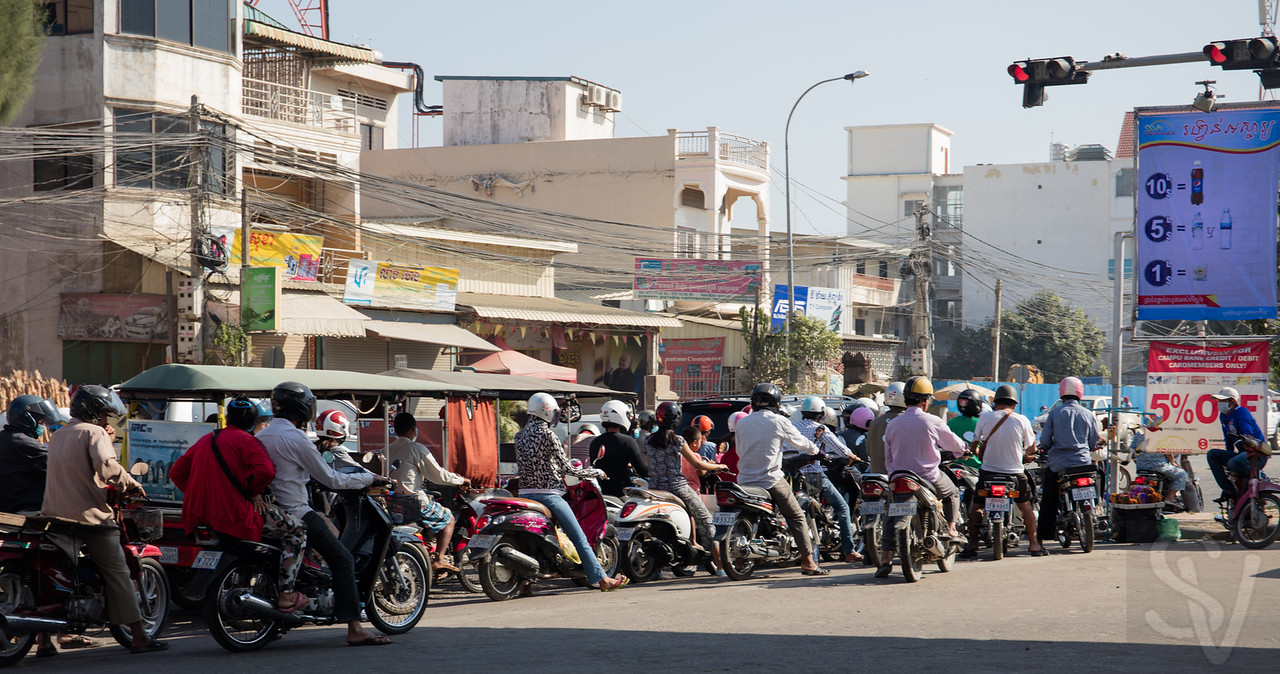 All in all, we didn’t do much in Phnom Penh. We took the time to enjoy the exceptional culinary scene here which was a wonderful diversion. The one thing that consistently excited me the most about traveling the world for a year was the food. I love food. I love food. I love food. I am also blessed by listening to my mouth and not only sophisticated opinion. I like fancy French meals (like the one we ate at Camile Rue 200). I like eating fried tarantulas and crickets at sketchy roadside stalls. I like Taco Bell. I like food that makes my mouth happy and my soul sing. Phnom Penh had some opportunities to do just that.

The most surprising outing was actually Mexican food (tex-mex / mexican street food more precisely) at a little whole in the wall near the Royal Palace called Cocina Cartel. They have the usual taco, burrito and bowl selection that places in the US have, but my mind was rendered useless by the flavors. Carnitas where you can still smell the lime in the marinade, black beans and rice that tickle the front of the tongue, guacamole (REAL GUACAMOLE!) and a margarita that was just damn honest. I just grunted the whole time I was eating my carnitas burritos; it was obscenely inappropriate. This place might be the second best taqueria I’ve visited in my life. La Victoria Taqueria still holds number one in this man’s heart.

Lots of soups and curries and stir-fry were had. Rice with most meals meant we were eating local. I also happened to have the best sweet & sour fried fish I’ve ever had… at a simple little diner… for $3. We took a variety of food pictures while in Cambodia.

One evening we went for a sunset cruise on the Mekong. It was nice and the food was decent. The views were fantastic despite not being given an epic sunset in itself. As the cruise was mostly post-sunset, the lighting was low. While I could take in the views myself, I didn’t have the right photography setup to capture it well. My camera really only works well up to 3200 ISO and my lens is f/4… so it was just a bit too dark to take good pictures. I think we snapped about 100 photos and found less than ten to be of usable quality. On a smallish boat, a tripod doesn’t really help much; the vibrations from the engine are worse through a tripod than through my body.

Cambodia has been absolutely amazing, with one exception: there was nowhere to walk.