Neither bothered nor sad on Christmas

These were my first steps in Cambodia.

When we planned this trip and decided our rough itinerary in 2014, there were two places I was most excited to visit: Siem Reap, Cambodia and all of Japan. My ideas of Cambodia were as half-baked as anyone who has ever watched NatGeo but yet not set foot in the country.

I am a bit more educated than when I arrived. I’ve learned of the Khmer Kingdom of ancient times, a bit about its rulers and wars, but mostly about its great architectural and building legacy. The temples here are astounding. Most are a volcanic rock core with a facade (albeit thick) of sandstone. During our brief time in India we saw first hand how poorly sandstone stands the tests of time in a humid and rainy environment. That left me quite surprised to see exquisitely intricate carved sandstone in structures that were not only built in the tenth century, but also abandoned and lost to human knowledge for nearly one thousand years: Banteay Srei.

After touring five temples in three days I can say the places here are amazing and a trip to Siem Reap will not disappoint.

The first day of tours we saw two temples on the outskirts of the Angkor temple complex: Preah Khan and Ta Prohm. Ta Prohm happens to the the site of much “Lara Croft: Tomb Raider” filming and we decided that movie would be perfect for our Christmas Eve pizza-and-a-movie tradition. (Internet didn’t cooperate, so we watched it Christmas evening and watch Big Hero 6 on Christmas Eve). Both of these temple complexes have significant jungle encroachment problems that slowly wreck the temples. The old saying that nature always wins is so obviously true, but it is interesting to see that in an environment as hostile as a jungle (humid, heavy rains, rapid growth) that simple stone structures such as these could survive for nearly one thousand years largely lost to humans. It’s clear that between the twelfth century and the nineteenth century, none of the Buddhists here read: “Zen and the Art of Temple Maintenance.”

On day two we woke up before five in the morning to watch the sunrise over the Angkor Wat temple. I had been experimenting with stop-motion video on my camera, but given that it was pitch black and I had never seen the temple, I only had a faint idea what to frame and even less idea of how to light meter it. If you intend to do this, I highly recommend going the first day and taking a reel of pictures to provide you with the information you need to go the following day and set up your prolonged shoot. That was not in the cards for me and I have no real regrets. The sunrise was nice, but not spectacular as the cloud cover obscured the sun itself and there was no gradual lighting and colorization of the temple; after the sun rose, the clouds cleared a bit and things just launched into good lighting.

While I enjoyed all of temple visits immensely, Angkor Wat was my least favorite. I particularly do not enjoy tourist attractions that have too many people.

I am used to waiting in line and patience has been something earned on this trip, however when people clutter the actual attraction I find it hard to absorb anything but their collective angst, which is what happened at Angkor Wat. The picture there is the crowd at the reflection pool and I'm taking the background image of this post. I'm frankly surprised that no one got pushed in. The top part of the temple (which is restricted to one hundred visitors at a time) was beautiful - likely a symptom of low population density as only one hundred people at a time are allowed in.

Later that afternoon, we went to Angkor Thom and it was fantastic: all the faces! Cambodia is a jungle (or at least the vast majority of it is) and Siem Reap is in the heart of it all. After a few days of being here and walking around, the humidity bonds with you in a way that makes you glisten at all times. It sounds disgusting (and I suppose it is), but given that it only gets up to about 33C this time of year, it isn't painfully hot and you just get used to it.

On day three we went quite a distance from the central city here to visit a small temple known for its consistently red sandstone and more intricate carvings: Banteay Srei. We got here early and while it wasn’t the prettiest temple we saw, it managed to fill me with an overwhelming sense of awe. There were very few people at the temple when we first arrived, but the guy behind me was carrying no less than $30,000 worth of camera gear. As we entered the main temple grounds, I saw another professional photographer walking from inside the main temple to the outside of the moat. He was toting similar camera gear and a big ruck-sack with “National Geographic” written on the top. It was pretty exciting for me to see a NatGeo photographer working on assignment… such a cool job! 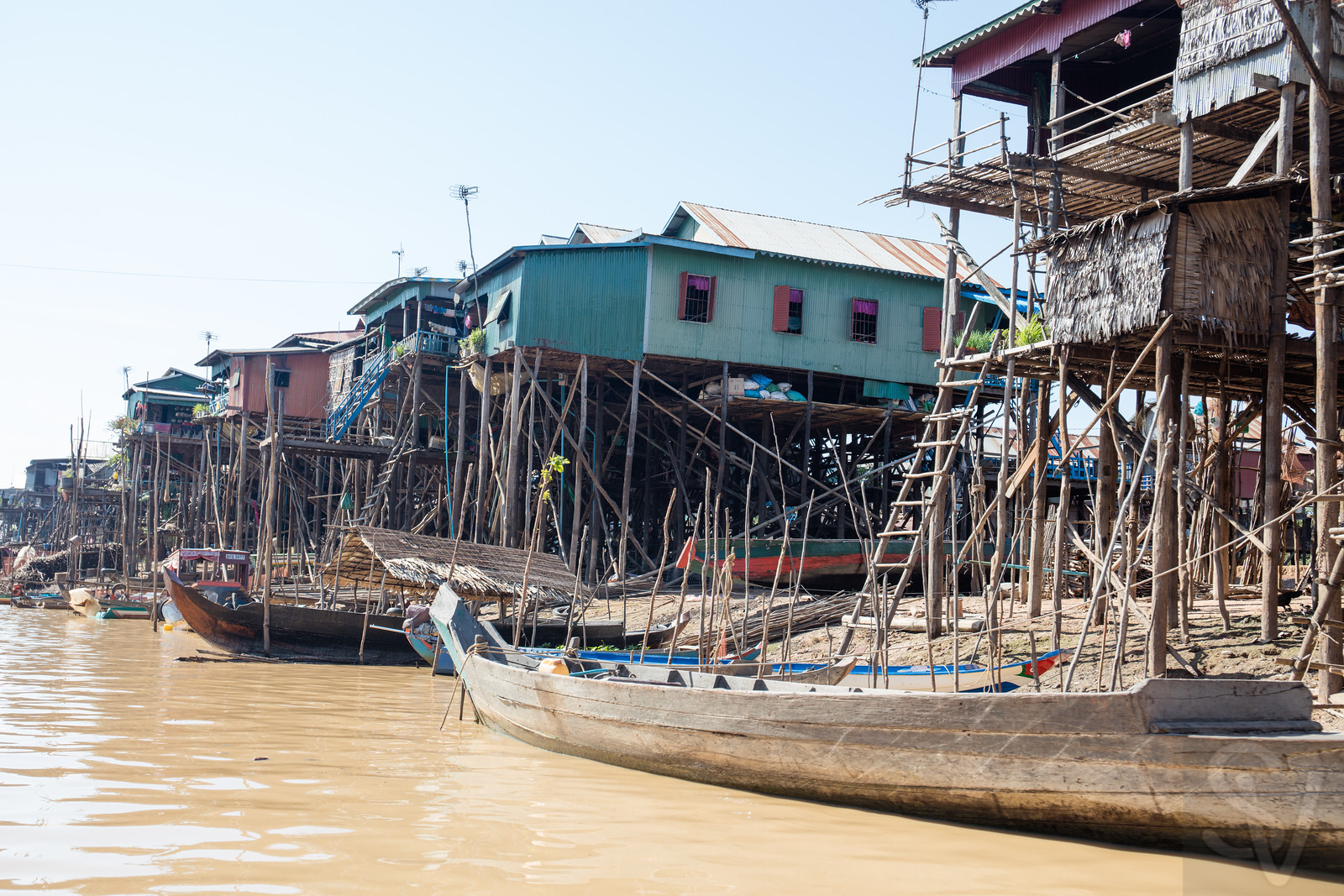 After Banteay Srei, we hopped in the car and began our car ride to the fishing village of Kampong Phluk. This village alone made me appreciate Siem Reap more than any other individual experience.

Architecture and artifacts are great, but people make a place. This little “floating village” consists of around 100 homes that are built on stilts where the Tahas river empties in to the Tonlé Sap lake. Rainy season here is like nothing in the imagination of a non-tropical dweller, changing the base water level by several meters for months. The people here in the village were going about daily life; kids playing, adults doing chores, everyone focused on just being normal. No hawkers; no beggars; kids said “hellogoodbye,” but did not follow us around. Everyone here seemed content.

It was fascinating to me to see the kids just playing games just as kids in the alley play at home. More interesting was hat they paid very little mind to the three young ladies accompanying me. In other places, kids jumped at the opportunity to engage, but much of that is for the prospecting opportunity. The adults went about their business as well preparing fish, mending boats, preparing for fishing, etc. The only individual that paid us undue mind was a very old lady sitting high above us that stared at us though the pars of the porch railing, but, as we all know, old people (the really old ones) can be quite odd -- a side effect of having no remaining fucks to give.

Taking in Christmas in another country away from extended family and other loved ones is a first for me. Doing it after five months away from those same people made the longing more profound. It’s times like these that I miss home and I’m reminded at the same time is that home is people, not things.

The people of Cambodia have seen travesty that I cannot imagine. The Khmer Rouge happened in the lifetime of every adult walking the street here. The deep knowledge of tragedy behind their eyes casts shadows of emptiness and loss, demands solemn respect and yet makes the people here seem softer and more human than any place I’ve been. They all share some part of a perspective that I hope to never have. At the same time I know that perspective would make me a better person as I can see it all in them. They seem kind, wonderful and deeply content in a way that is hard to explain. Their disposition, on the surface, reminds me of what I saw in Bangkok, but there is a lack of wanting here that rounds out feeling nicely.

Hawkers bother me and beggars make me sad. I would like to visit places and never see another hawker, for my own sake. Beggars, on the other, I would only like to never see for their own sake. Here, I am neither bothered nor sad. In lieu of my extended family and loved ones, I can’t think of a better people to spend my Christmas around than the people right here in Siem Reap.