Home is Not a Place, It Is a Feeling

We spent the last four days at Apani Dhani. This is an amazing little retreat in the small city of Nawalgarh. It’s a working farm that can house up to around twelve guests at a time, of which we were five. It was more than quiet; it was downright tranquil.

First a bit about Nawalgarh. It’s a rather small (100,000 people) city in the northeast of Rajasthan that was founded in the mid-eighteenth century. It was a pretty hoppin’ town for big business back in the day (specifically for the Marwari community) and has some beautiful and old havelis. However, as it is off the beaten path and sees significantly less tourist traffic than other major Indian attractions and lends itself to a rural frame of mind, it has some of the less Western-welcoming aspects of Indian culture.

Woman and men don’t mingle much at all. Women tend to stay in the houses. Most are covered in veils when out and about. We got more gawking stares here than anywhere else in India (though my beard sometimes is the attractor of that). The garbage problem is acute here and the overarching general problem is that common places are uncared-for dumping grounds. So while there are some beautiful aspects to Nawalgarh, it’s complexion is marred to my Western sensibilities.

So, given this, how was this perhaps my favorite place in India? Honestly, it had nothing to do with Nawalgarh or its history.

We stayed in a small self-sustaining Eco-Lodge called Apani Dhani. It was awkwardly (at first) crunchy for my taste, but the vibe was so good that I soon acclimated and found deep enjoyment here. Just as an example, we were given an eleven liter bucket and a mug to bathe. I'll note that it worked surprisingly well. I'll also note that my standard for "clean" has long since passed into something completely unrecognizable.

We were here for three full days and only left the lodge on one to take a city tour. The rest of the time we spent relaxing, taking cooking classes, learning how bangles are made and trying our hands at tie-and-dye. 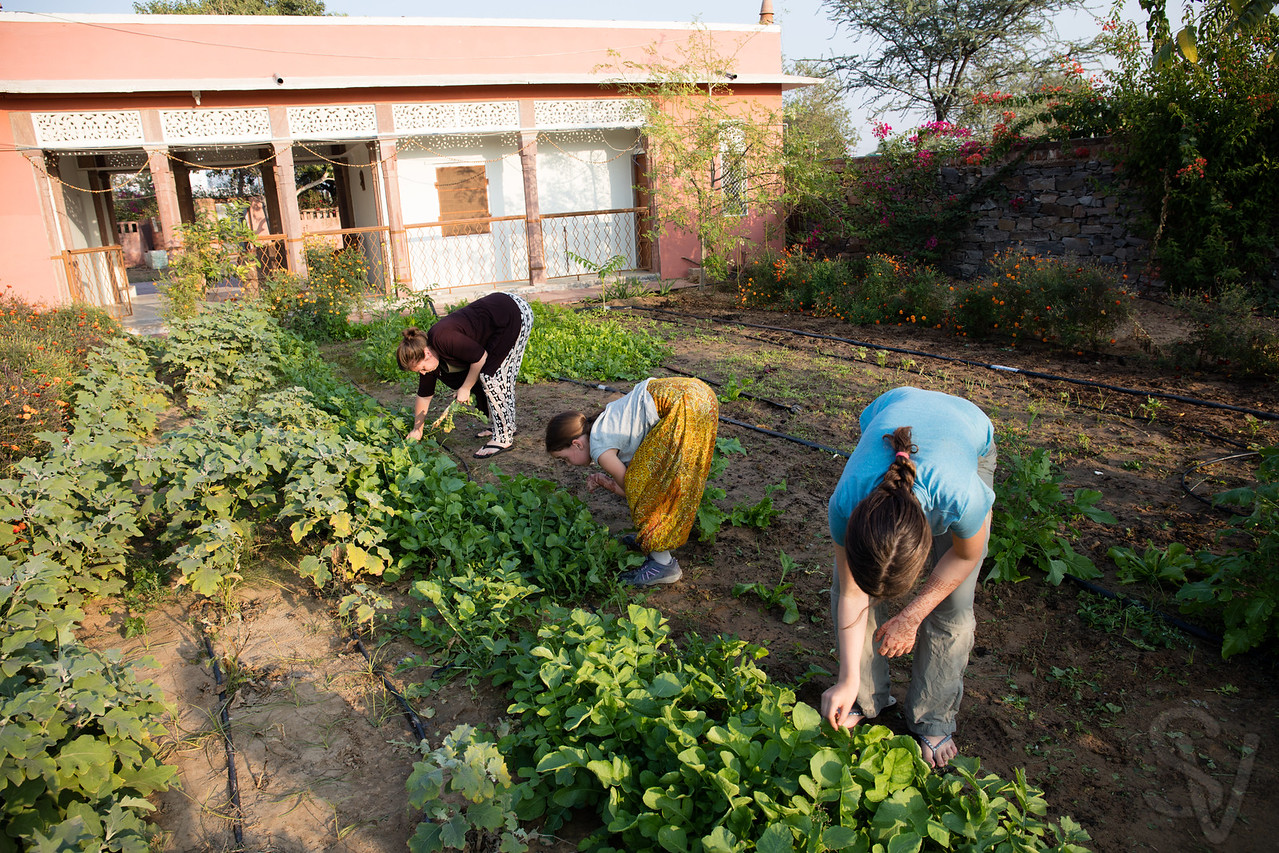 This was a strict vegetarian setting, but when the dishes are so well executed, the want for high protein and animal fat is held at bay.

Twice I participated in cooking classes and learned about how different spice combinations are used in different dishes, as well as how to make chai. We made dinner (sans rice and soups) for all residents of Apani Dhani for two nights which was a pleasant variety of food. Meals usually consisted of some potato dish, an aubergine dish, some dal dish and one more veggie dish (which it seems is universally called "Veg" outside the United States). My favorite dish was the dal dish that Zoe made during our first cooking lesson and the dal dish during the second cooking might rank as my second favorite. The second dish was something I had never seen as it was based off a hand-rolled chickpea flour (eggless) pasta; delicious.

Every meal we had at Apani Dhani reminded me that if for some unexplainable reason I was cursed to vegetarianism, eating good Indian good might make that sad life bearable. I did say "might."

Regardless of a cursed life upon my return to the United States, we have a bit of mandatory work to do to prepare ourselves for delicious cooking: spices. We must get ourselves an Indian spices box. Additionally, I believe we should invest the insignificant effort to buy the spices whole and grind them ourselves. I think it makes all the difference.

The bangles “class” we took was not what I expected. I understood that we’d be learning how to make bangles, but it was most certainly a demonstration instead. A nice husband and wife, who spoke no English, came and setup their tiny portable workshop. The girls and I watched on as they proceeded to make resin-based bangles to-order for each of the ladies of my house. Despite not being quite what was expected, everyone seemed quite interested in the process and overall satisfied with the “class” itself. I found myself lost in their work as each wordlessly completed the others actions switching roles seemingly at random. She was the expert and he the assistant, but that was only made clear by the translator who personally knew them.

As our travels are so long and shipping things home is not always so convenient, we very rarely buy things. The girls are used to not getting any knick-knacks or touristy tchotchkes as they know they’ll have to carry them. This time they collected themselves some souvenirs and were quite excited. Not surprisingly, they spent most of their time deciding which of their bangles they would be giving as gifts to which of their friends. I hope that the bangles survive our travels well as the resin they are made from makes them quite fragile. While some children want for nothing, these wonderful young ladies want so little for themselves.

The bangles workshop will not be something that we attempt to replicate at a birthday party (or anywhere else) when we return home.

Tie-and-dye is a dying art in this region of India as it is so much cheaper to produce it industrially than produce an artisanal scarf or piece of clothing. We sat around tying off knots with twine for the better part of an hour. Frustration bubbled up at times as it was a new skill and required focus and an interesting combination of finger strength and fine motor skills. Everyone’s tying came out a little different and I think some of us were disappointed that we might not have done it right. Next we moved on to make a trash fire to boil water to set the synthetic dyes they use. The instructor took the liberty of wrapping-off (with plastic and leather strapping) materials for their dye baths as it was clear that if we messed up this part it would all end horribly.

What we ended up with was a bunched rag that looked half red and half yellow, not so impressive. At last, he had us pull the scarves (like we were pulling out a picnic blanket) which caused all the twine ties to pop off and absolute magic ensued. We were left with five beautiful tie-and-dye scarves that will stay in our memories forever.

If we can figure out the plastic wrap nuances requisite for submersion in the dye, I think we might want to try this sort of thing at a home as a fun neighborhood project.

One of the nicest things about staying here was the sense of family and feeling of home. Home is most certainly a feeling, not a place. As Apani Dhani is actually someone’s home, if your open yourself to it, you cannot help but feel a sense of home here. There were two boys that lived here: Deepak at eight and Harsh at twelve. My three young ladies were so happy to have other children their ages around. Chess and cards were played often, but hide-and-go-seek was the game that captured their hearts and minds while releasing months of pent-up giggles.

If you come to India, relaxing at Apani Dhani for a few days might just change who you are.